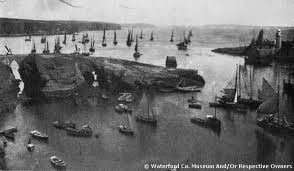 The Herring Fishery – Growth and Decline
The History of the Dunmore Herring Fishery especially during its peak in the 1960s was the subject of the November  25  talk for the Barony of Gaultier Historical Society.    John Molloy was the speaker.  John was  the government  Fisheries Scientist for many years ,  and stationed at Dunmore East  was an eyewitness to the tremendous growth of the fishery and the  events, issues, characters , politics and stories that made the period so  dynamic and historically significant. 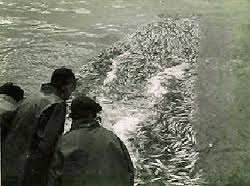 Mr Molloy outlined the biology of the herring, especially the seasonal migration and this proved to be a fascinating part of this talk.  He then went on to describe the evolution in herring harvest technology and the different kinds of boats used in the fishery.   He navigated his way with sensitivity and due regard for the facts through the story of The Battle of Baginbun , which was a confrontation on land and sea between boats from N.Ireland and boats from the Republic  that resulted from the political decision to give boats from access to the shoals of herring within Irish territorial waters.  He also spoke of  his participation in the negotiations in regarding fish quotas and management strategies.  He did all of this with a lightness of tone and sense of humour which went down very well with his large audience of over 70 people.  We were aware throughout his talk of his concern about the future of the stocks and the need to bridge the gap between scientist and fisherman.  On behalf of everyone present we wish to express our heartfelt appreciation to John for such an informative and entertaining talk.
Posted by Gaultier Historical Society at 20:34 0 comments