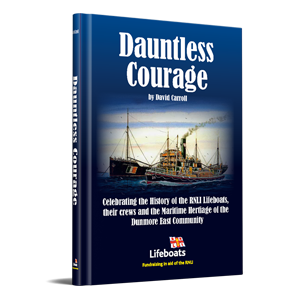 WLR FM radio presenter, former South East correspondent for RTE and author of ‘Souls of the Sea’ Damien Tiernan will lead the panel discussion with the author of ‘Dauntless Courage’ David Carroll who will also be joined by Dunmore East RNLI volunteer crew members Brendan Dunne and Neville Murphy. The launch is coinciding with the 50th anniversary of the Glenmalure Tragedy which is featured in the book.

‘Dauntless Courage’: Celebrating the History of the Dunmore East RNLI, their crews and the Maritime Heritage of the Local Community. All proceeds from the book will be going to the local Dunmore East Lifeboat Fundraising Branch to support the saving of lives on our seas.

After several years researching and writing of the book, the public unveiling will take place online with an in-depth panel discussion of the research involved in writing the book, the characters behind the lifejackets, the many acts of courage that took place far from shore, and a look at the local community that was so often the backbone of every crew that took to sea to save those whose lives were in peril.

The online event will take place on Wednesday 25 November at 8 pm for approximately forty minutes, with a live Q&A session for attendees afterwards. Registration for the event can be made here - http://www.dunmorelifeboatbook.com/book-launch/

David Carroll, author of Dauntless Courage said: ‘What has really struck me about writing this book has been the amazing goodwill and generosity of so many people who have helped to make this book possible, especially all the interesting and historic photographs and paintings that we have been given access to for inclusion in the book’.

Damian Tiernan, WLR FM radio presenter said: ‘I am honoured and delighted to be hosting this discussion, I have a long association with members of the RNLI in Dunmore and I worked closely with them over the years. The publication is a wonderful record of all that has happened complete with superb pen portraits and descriptions of events and superbly written and produced’.

Purchase of the book can also be made at http://www.dunmorelifeboatbook.com/product/dauntless-courage/ with all proceeds from the book going to the local Dunmore East Lifeboat Fundraising Branch to support the saving of lives on our seas. Orders and further information on the book can also be made by contacting dunmorelifeboatbook@gmail.com
Posted by Gaultier Historical Society at 17:10 0 comments 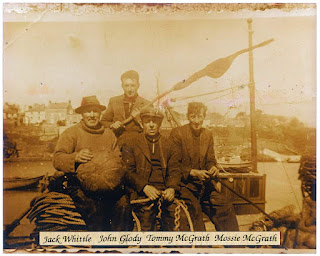 This is the crew of the Naomi Deuglán, a forty five footer, that fished out of Dunmore East in the late 1940’s. Jack Whittle is fondly remembered for having brought me, as an insistent nine year old, on his back down the chain to the deck of this lovely little trawler which was the forerunner of the Scottish ringers that came to Dunmore in the 1950’s. John Glody who around this time became a Dunmore East pilot is a well remembered figure making his way to the Pilots’ Spy glass always available on a gate-pier on the Circular Road. Tommy McGrath, the boat owner and skipper, was a well known generous and much loved Dunmore fisherman who later would introduce the herring ringer to the Dunmore fleet. His cousin Mossie McGrath who lived in the lower village was, as I remember him a soft spoken man, hard worker and skilled Gaelic footballer-?who was on the 1929 Gaultier team that won the County Championship.

The coiled rope suggests that the Naomi Deuglán was engaged in seining at the time although she is generally associated with herring drifting.

Our Townland today is Ballytruckle 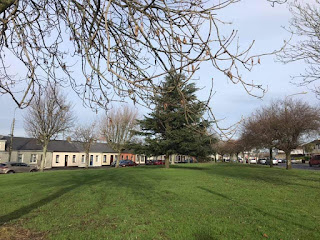 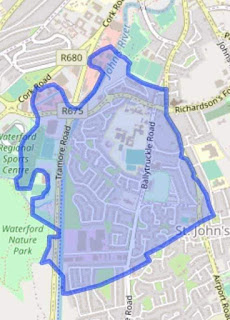 Ballytruckle has an area of:

Ballytruckle borders the following other townlands:

Grange Lower to the east

Kilcohan to the south

Kingsmeadow to the west

Manor to the north

Williamstown to the east

Ballytruckle is the 52nd largest townland in the Barony of Gaultier.

Anthony Foy, aged 37 was an Act Sergeant in the RIC and was a member of a household of 3 people.

Stephen Lynch, aged 40 was a general labourer. He was a member of a household of 6 people, which included 3 of his children who were born outside Ireland. One child aged 11 was born in India and also 2 children were born in America, aged 8 and 5.

Johanna Coffey, aged 59 was a dealer in milk and was a member of a household of 3 people.

In the 1911 census there were 541 inhabitants and the reason for the difference to the 1901 census is that the Ursuline Convent and School were not recorded in 1901.

Imelda Sullivan was aged 21 and was a sewing maid in the convent and she had been born in Australia.

Matthew Butler in his the “History of Gaultier” (1913)  tells us that the Danish invaders of Ireland were called various different names such as – Danes, Northmen or Ostmen but none of their leaders had  such a reputation for courage, ability and ferocity as Thorgil, or as he is also called Turgesius. From 830 to 845 he ravaged nearly all Ireland, but in the latter year he was defeated and put to death by Malachy, King of Meath. His name and fame were celebrated in various ways by his countrymen in Ireland, and so when the Danes were expelled from Waterford City by the Normans in 1171 they founded a village on the outskirts of the city and named it after Thorgil – Thorgil’s town. Later on these Danes became more Irish than English and adopting the Irish system of monenclature, called their village Ballythorgil, Ballythorkil. With the lapse of years the name became Ballythorkill or Ballyturkill and later on Ballytruckle as we know it today. Photo courtesy of The News and Star