KNOWING YOUR PLACE:- NEWTOWN/DUNMORE ROADS- ITS HISTORY AND DEVELOPMENT by  JOE FALVEY

This Talk will feature the stories of Waterford Castle, Ardkeen and other Big Houses, such as Newtown, Mount Pleasant, Ballynakill, Grantstown, Glenville, Maypark, Prospect, and others of historical significance in the City end of the Barony. Many of these have given their names to the area's modern housing estates. These and more besides will feature in Joe Falvey's next upcoming Talk( Revised Edition) for the Barony of Gaultier Historical Society. 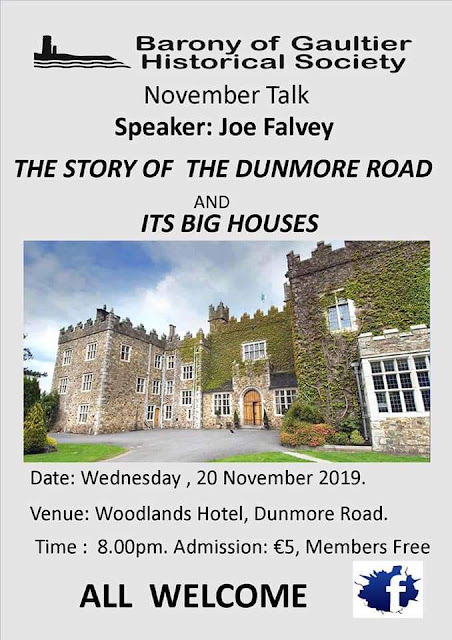 SUB-URBS INTACTA
And Joe will talk of the role they, inter alia, played in the development of the eastern suburbs of Waterford City including commercial and educational,  over the course of the last 300 years since the city walls came down and the first building of Lombard/William Street Bridge in 1726 as its Merchants moved out of the confines of the City along the sunny and leafy banks of the Suir estuary,all part of the great Barony of Gaultier.

All welcome. Free to members. €5 to non members
Posted by Gaultier Historical Society at 18:42 0 comments