The October photo from our 2020 Calendar.

Our 2021 Calendar will soon be in the usual outlets.

The photo was taken in 1967 on Ken Purcell’s Farm which was situated in the general area where Ballinakill Shopping Centre is today. The men in the photo are harvesting/pulling sugar beet for Ken Purcell who at that time was walking to Dublin on the 1967 NFA “Long March” to Dublin. In the Barony of Gaultier like many other Irish rural areas when there is harvesting or other vital farm work to be undertaken during a crisis, neighbouring farmers would always come to the farmer’s aid and the work would be completed. A similar incident took place on the farm of Bill O’Brien of Rathmoylan with the harvesting of tobacco in 1933 during the “Economic War” and the Nine County Waterford Farmers era.

In this photo some of the farmers are holding “Bill Hooks” and others are holding “Cleavers”. Either one of these tools were used for the “topping” of the Sugar beet as the beet was pulled from the ground. 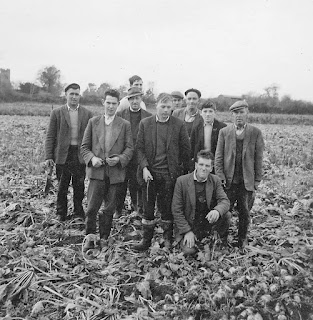